organized by Zachęta—National Gallery of Art in Warsaw 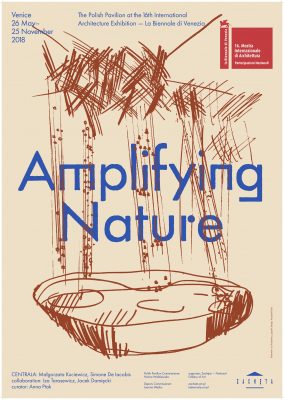 organized by Zachęta—National Gallery of Art in Warsaw

Amplifying Nature is a concept proposed—by the eponymous project presented in the Polish Pavilion—to reconstruct the planetary imagination of architecture.
The causal aspect of nature, the material basis of biological existence, has been removed from the view of construction for living, working and resting. The Amplifying Nature project stands for the opposite: the transcorporeality of architecture, meaning that processes involved in the reproduction of the planet as we know it mediate the social routines in the form of buildings we inhabit. The universe speaks to us in the language of architecture. 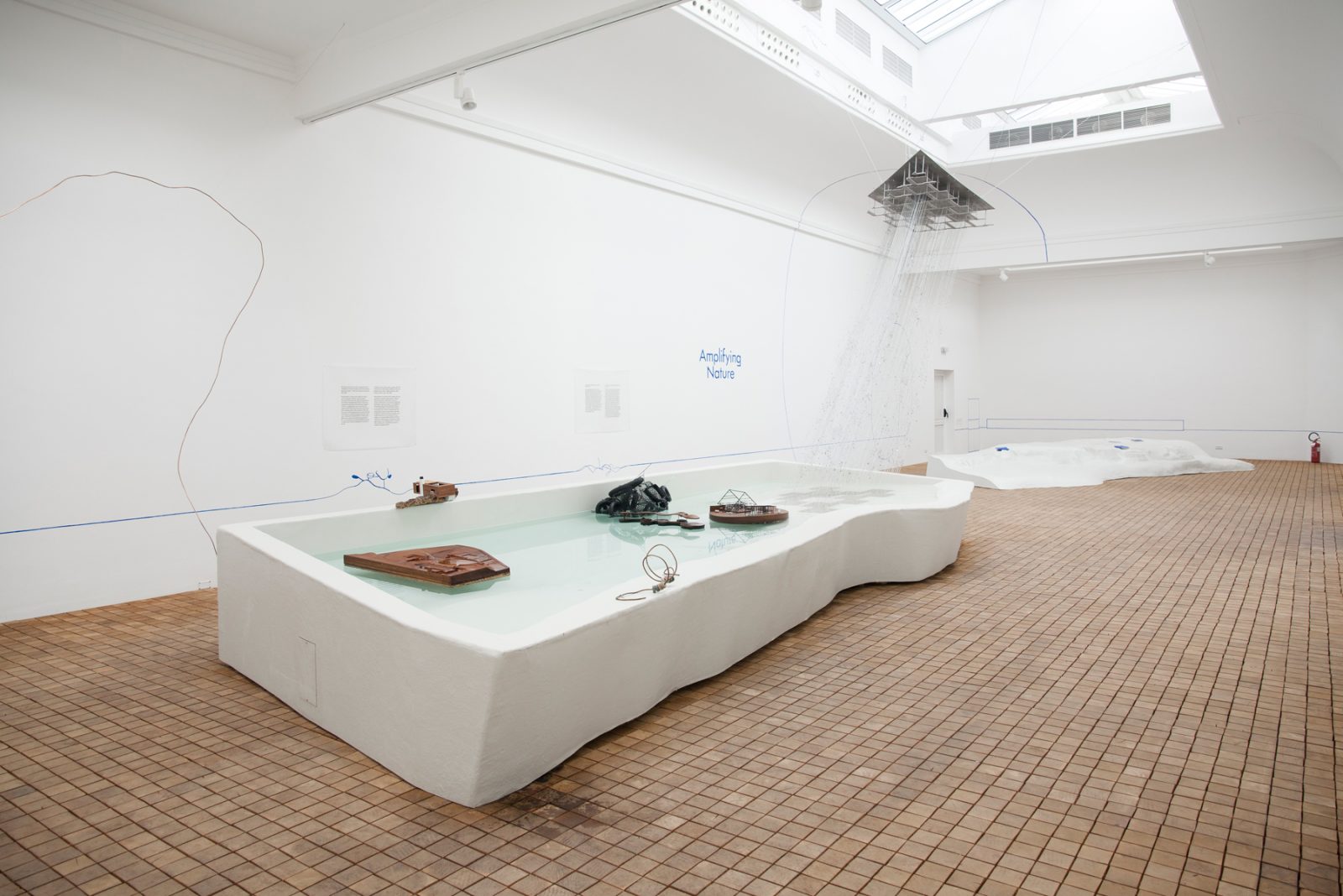 CENTRALA have analysed the phenomena of gravity, light oscillation and water circulation in modernist projects created in socialist Poland on the verge of Great Acceleration with an empathy for and understanding of the Earth’s workings. They have also designed two new ones, taking the natural processes hinging on the phenomena—rain and circadian rhythms—as actual matter of architecture. This proposal, which acknowledges that geological and life-sustaining metabolism of the planet are changed by humans in general, points to the local and particular modes of imagining and constructing the collective life.

The exhibition can be approached on three levels. It presents the research on selected 1954–1976 works by affiliates of the Art and Research Unit at the Academy of Fine Arts in Warsaw, also these who became known for their later individual practices: Team 10’s Oskar and Zofia Hansen, and visionary Jacek Damięcki. It premieres the new sculptural interpretation of these taken-for-granted processes undergirding both the planet and architecture.

In this venture, CENTRALA collaborates with sculptor Iza Tarasewicz to create the affective and materially responsive environment of the exhibition. It also proposes the concept of amplifying nature, capturing this dynamic in various scales and a collection of research materials and interdisciplinary conversations in the book Amplifying Nature. The Planetary Imagination of Architecture in the Anthropocene, edited by Anna Ptak. 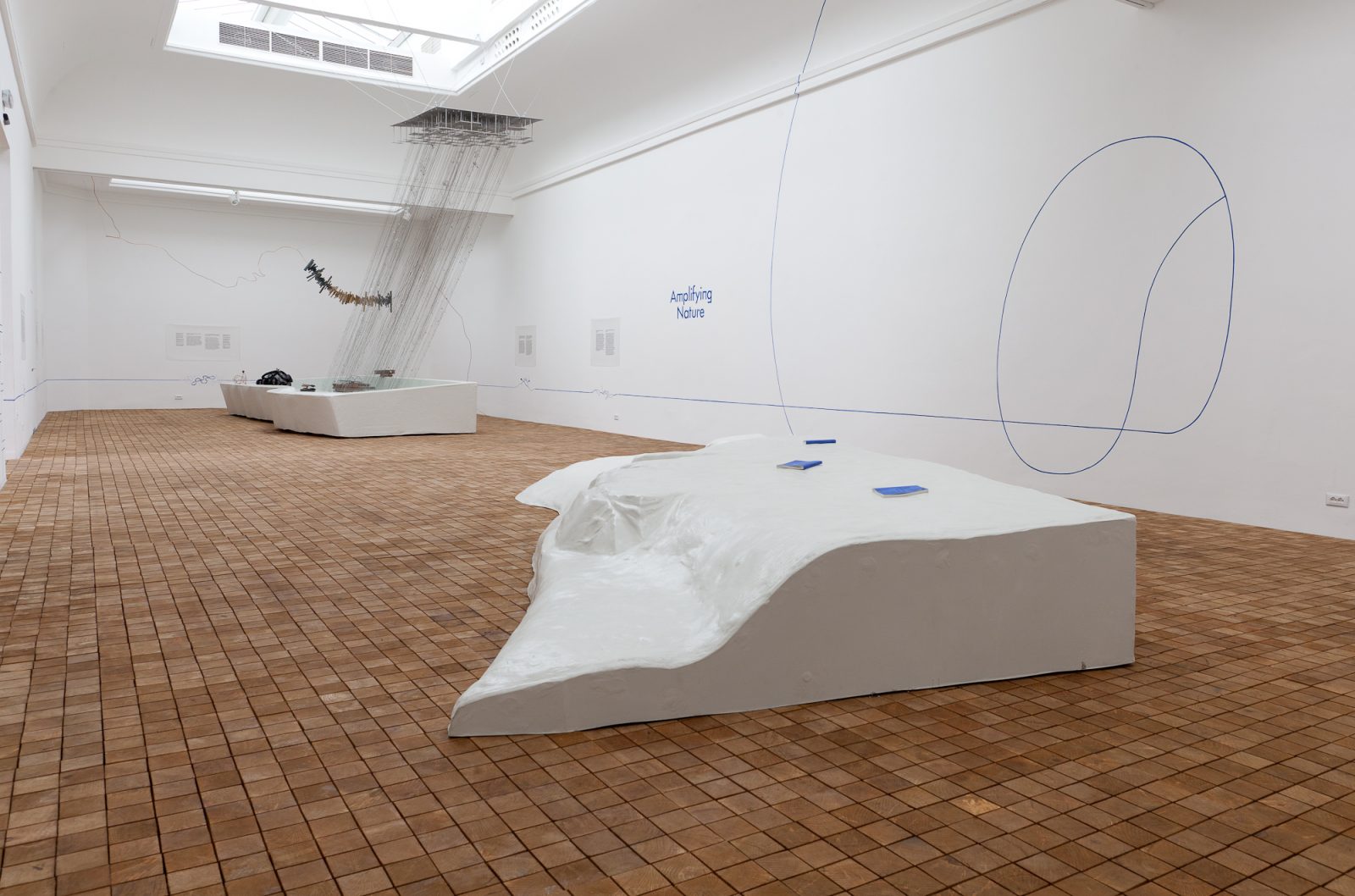 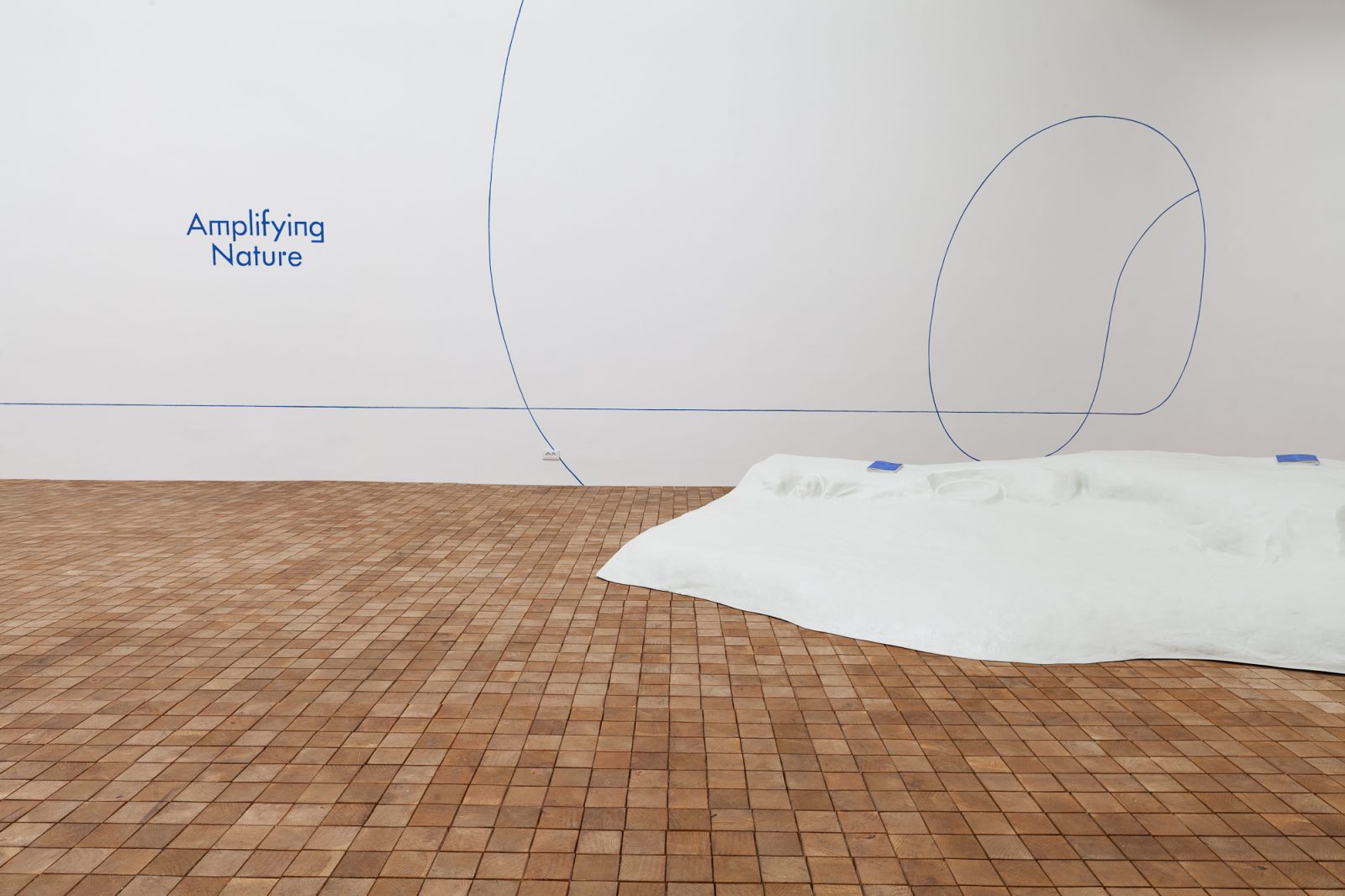 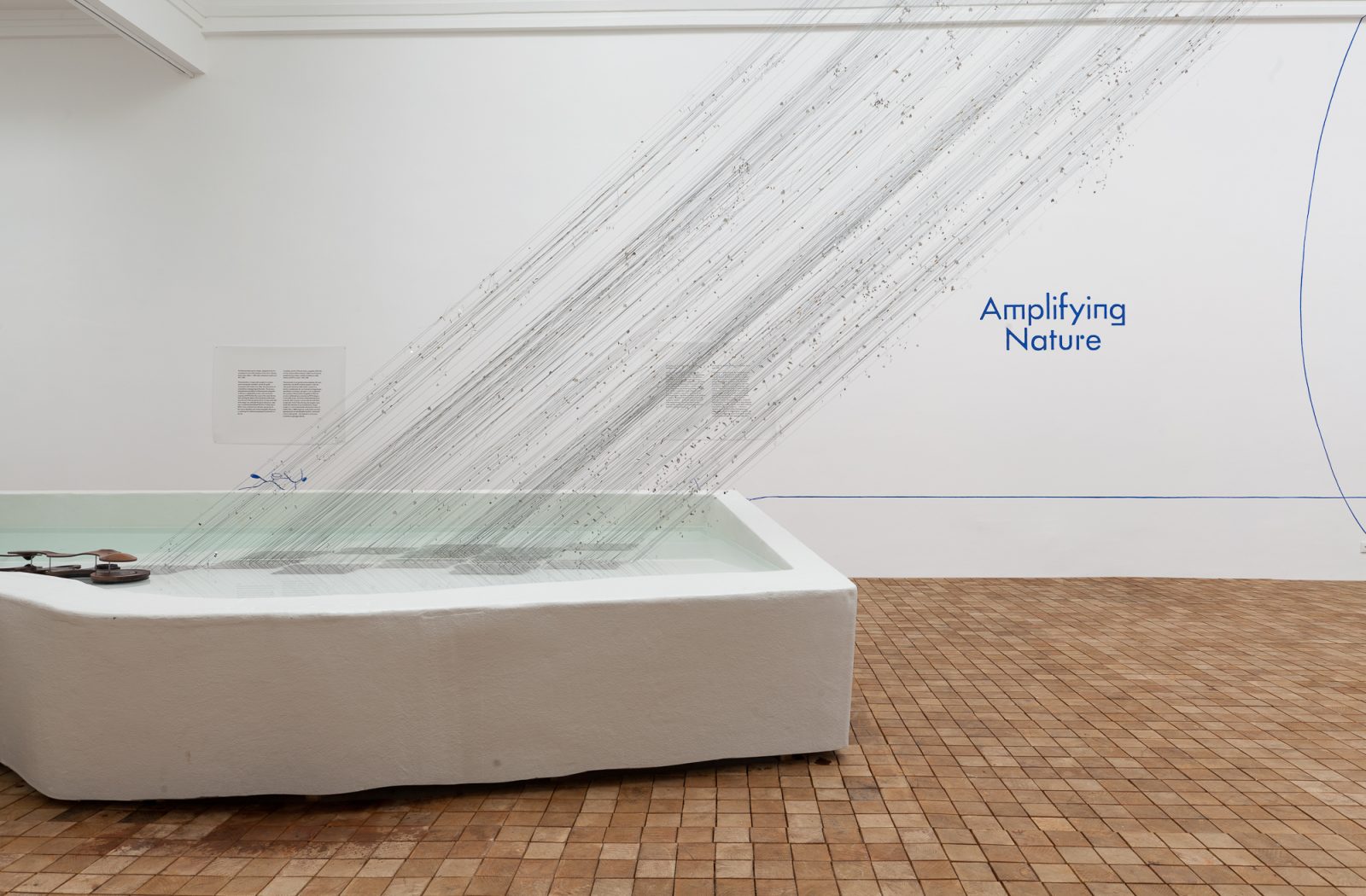 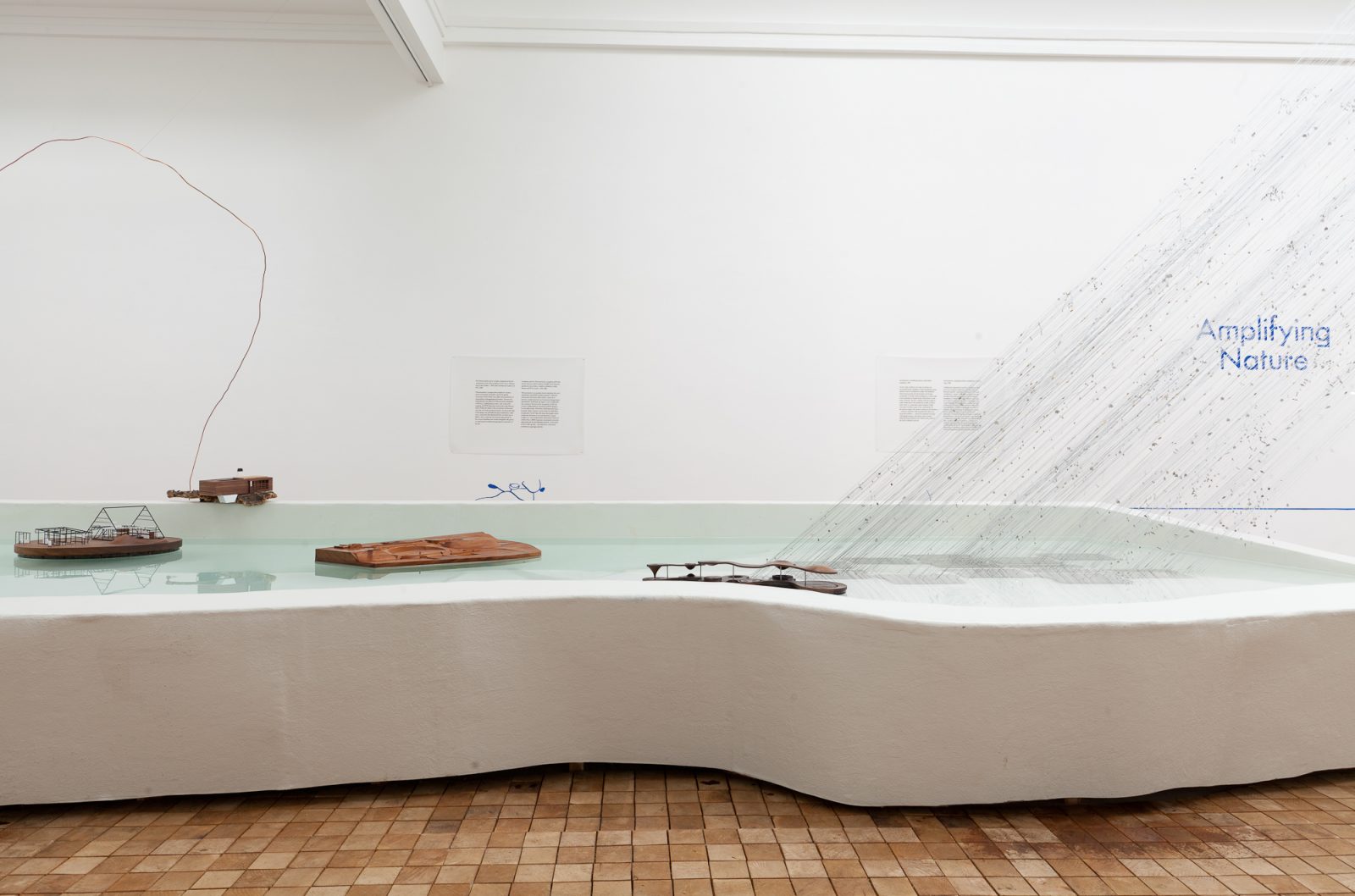 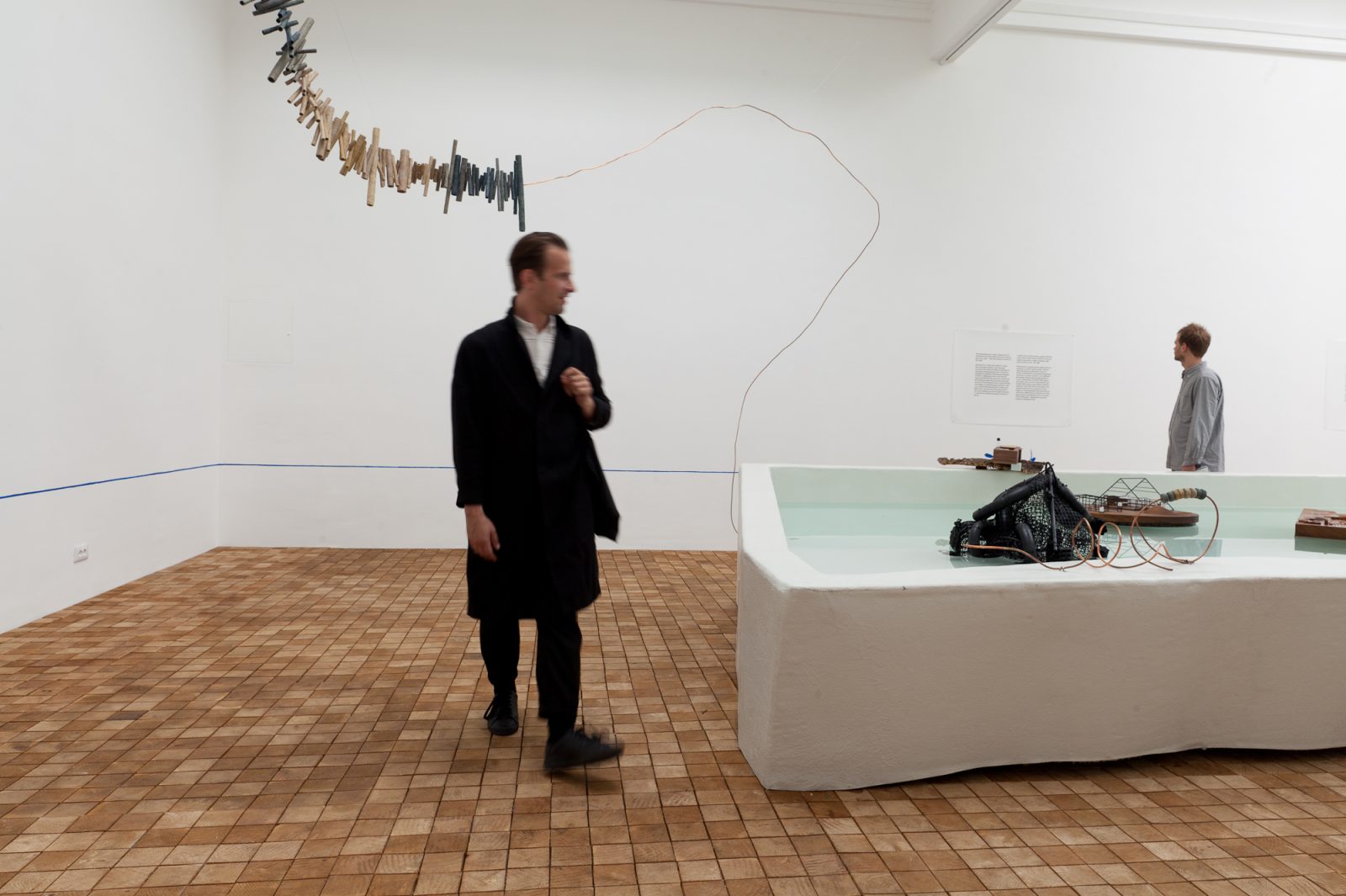 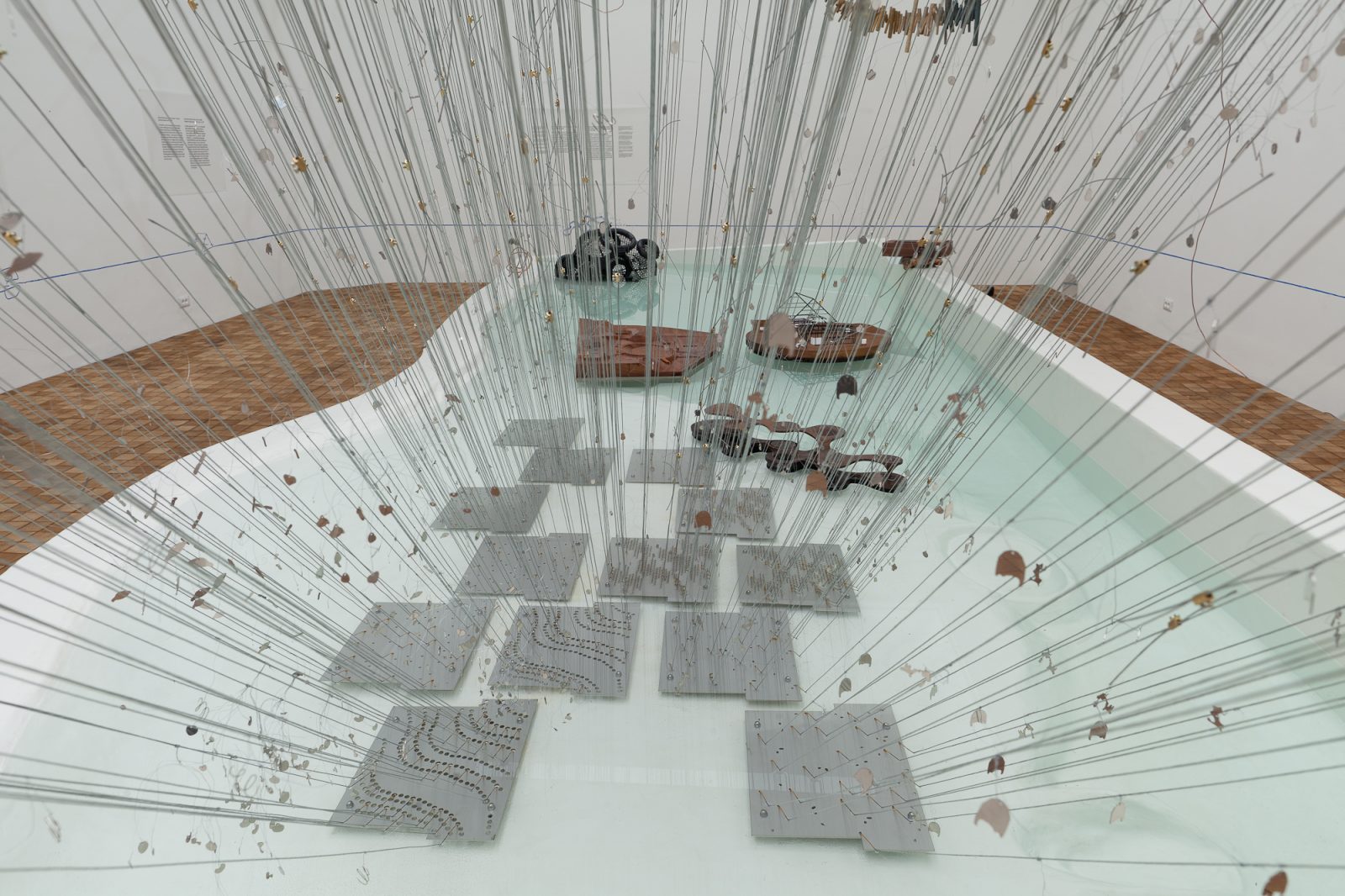 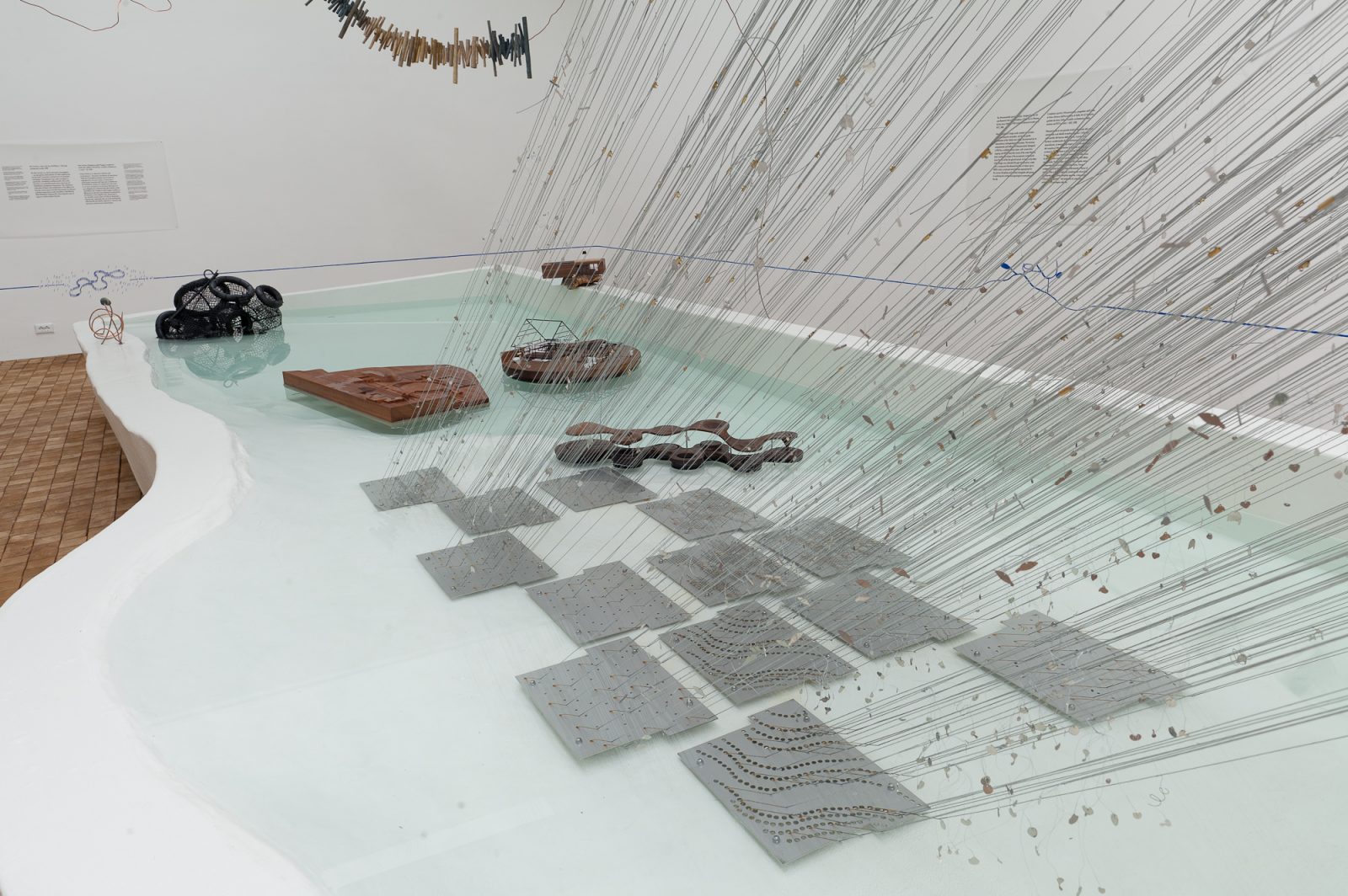 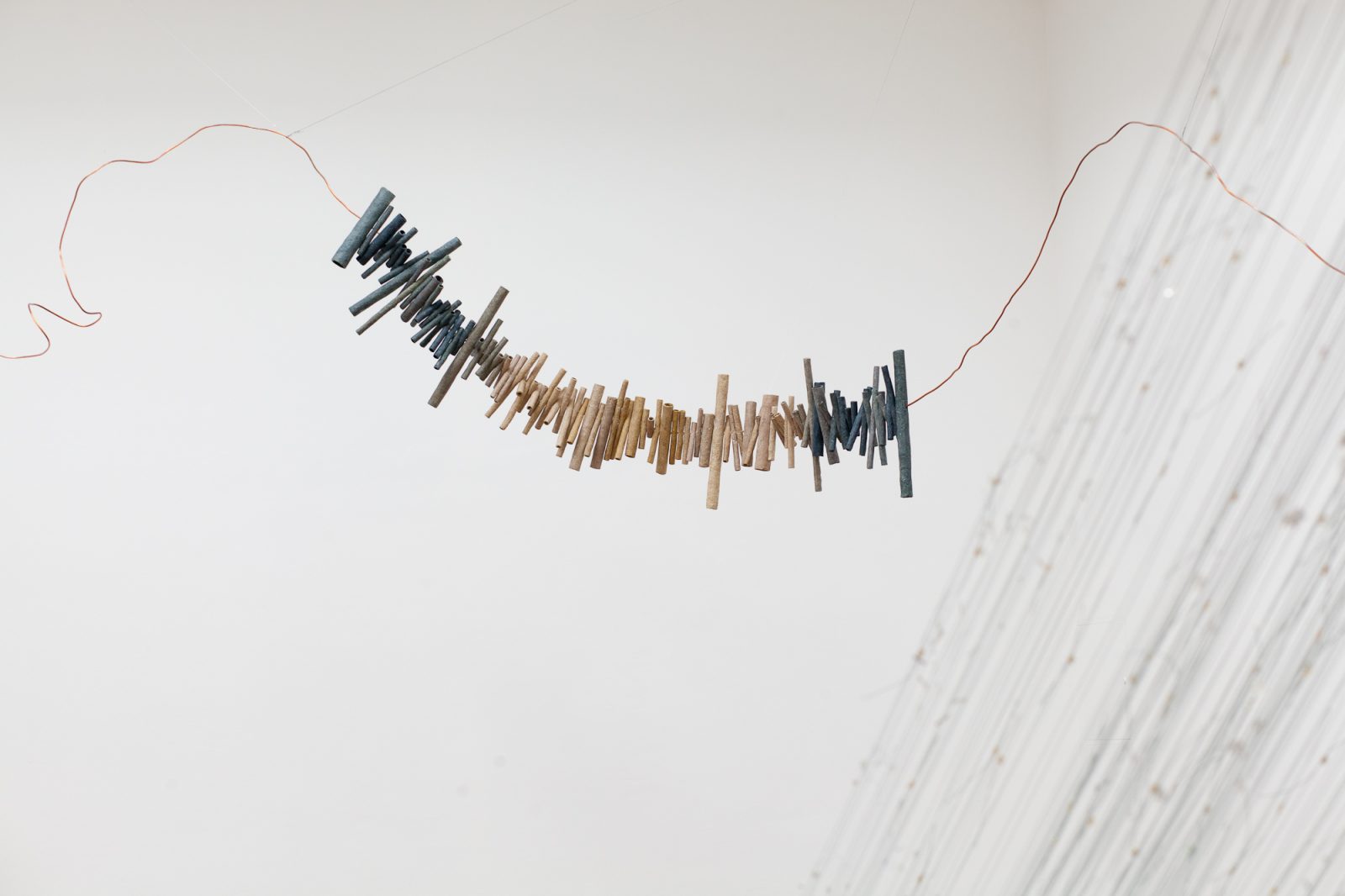 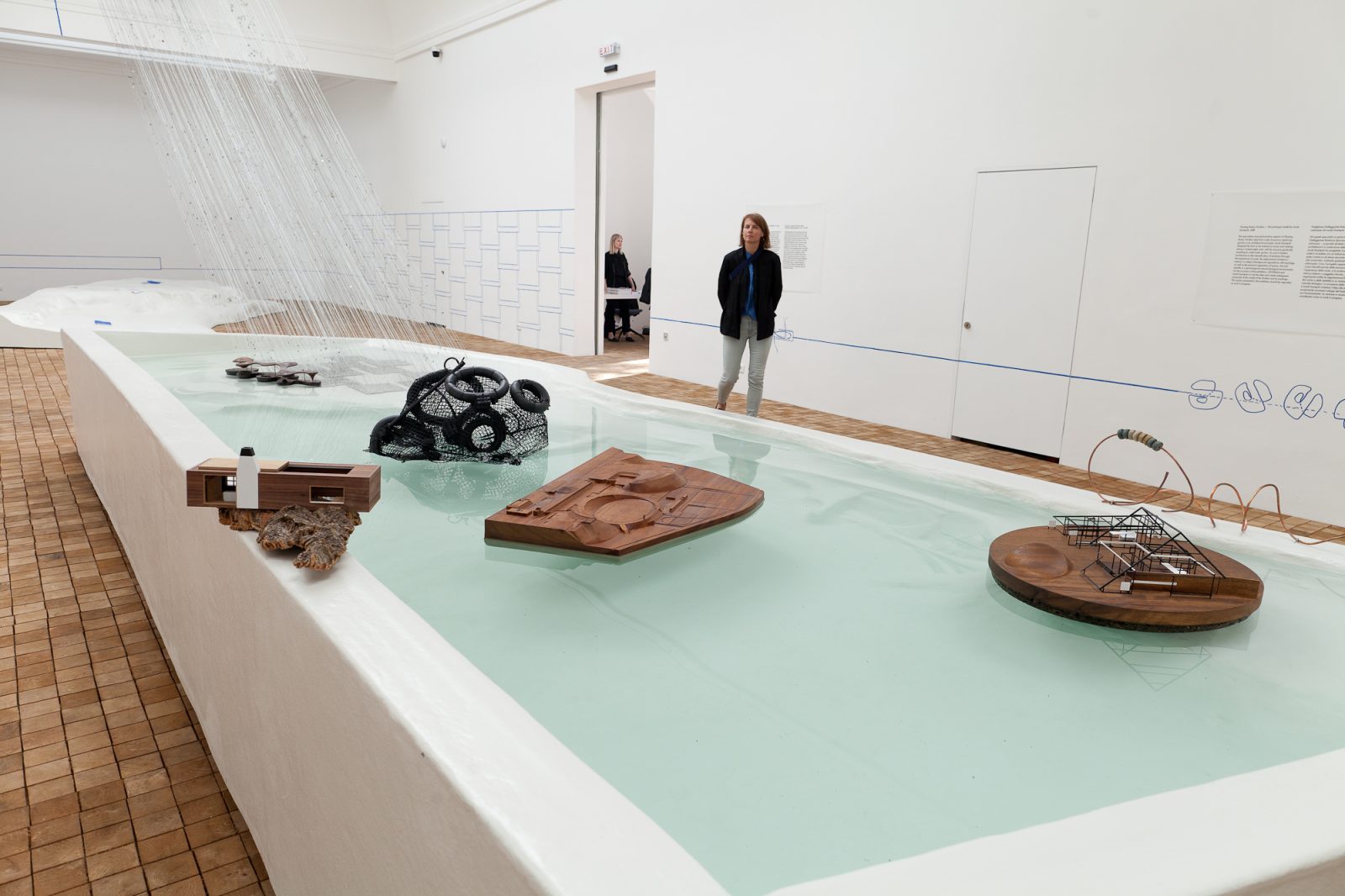 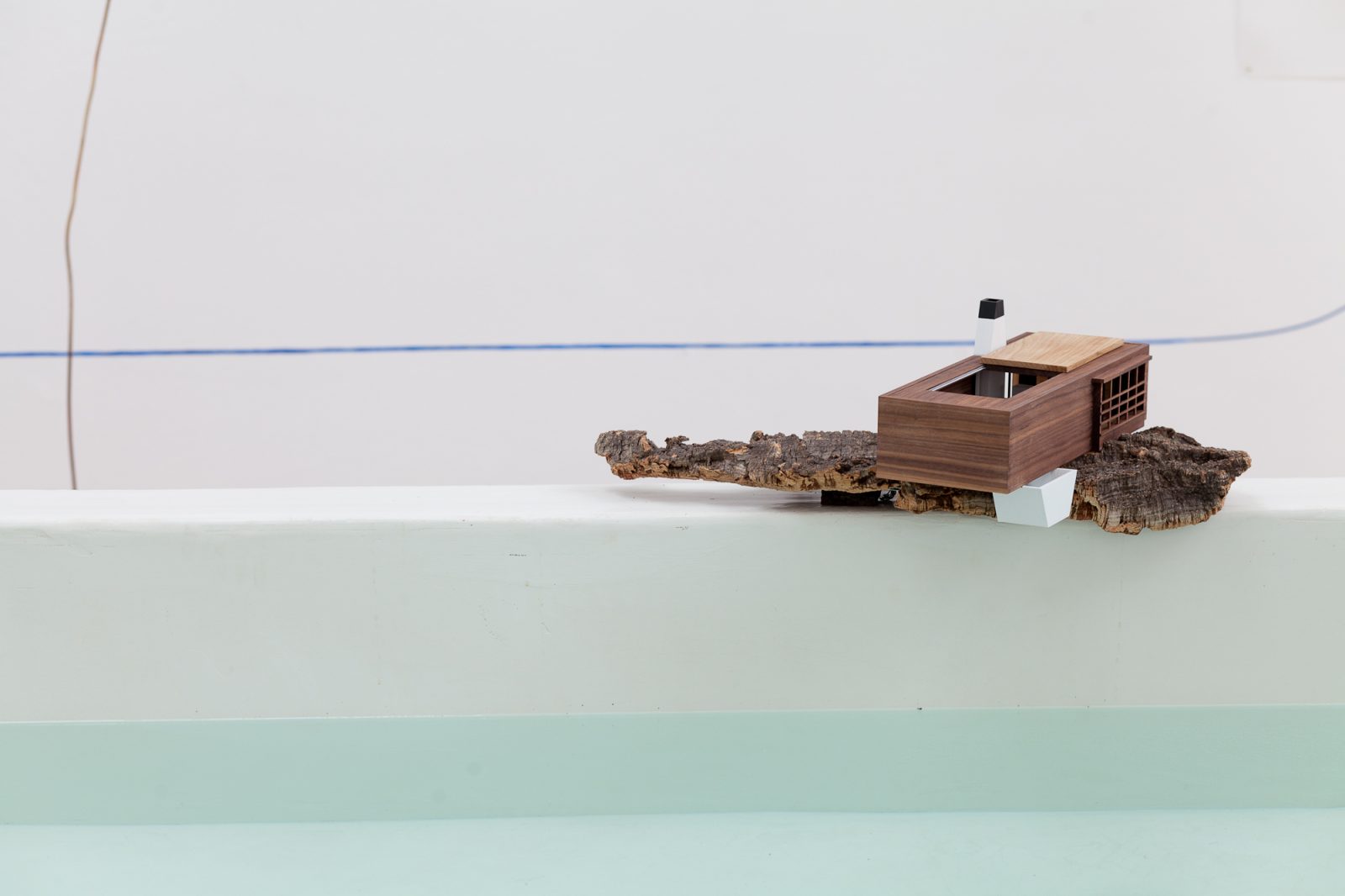 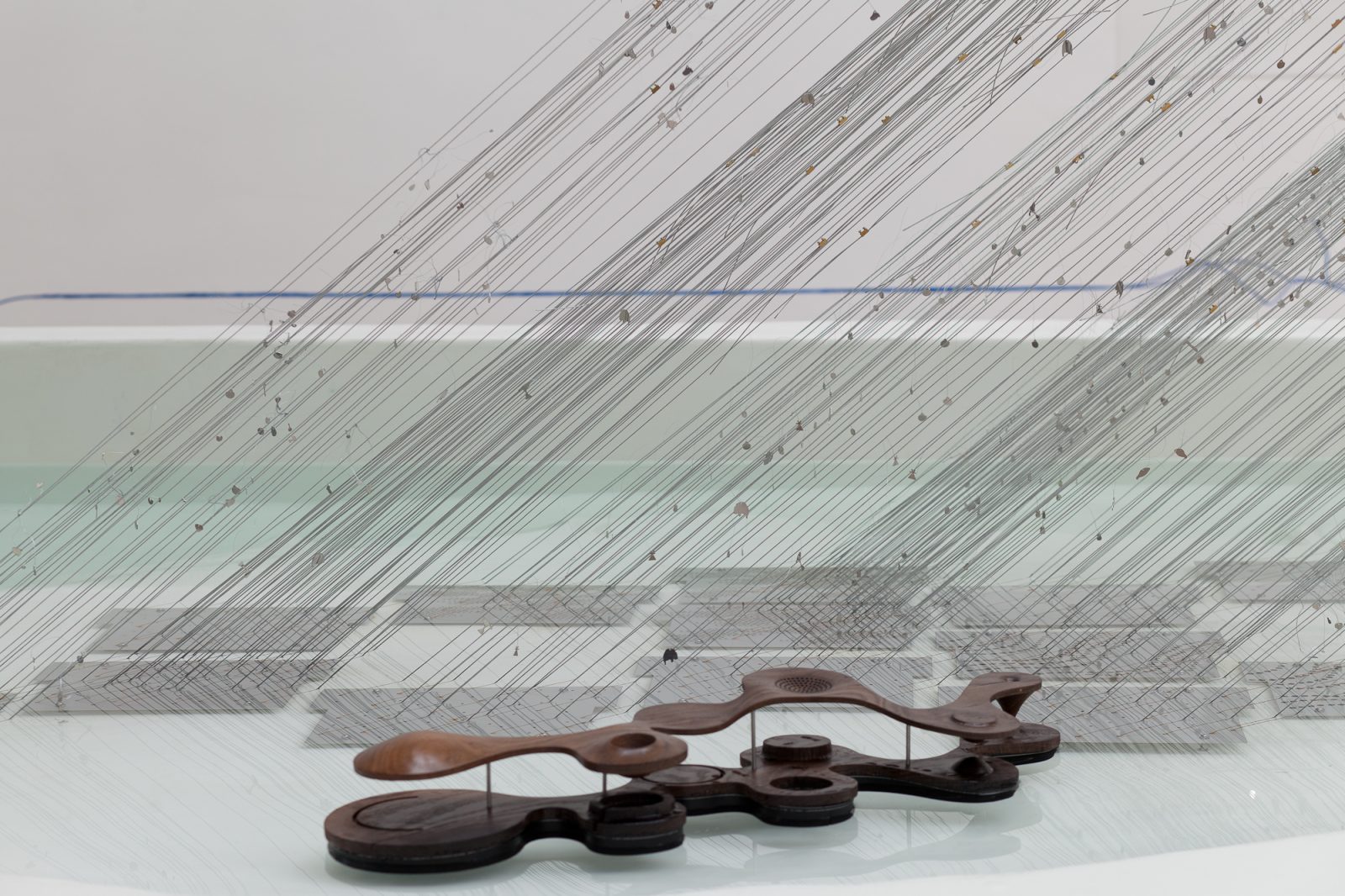 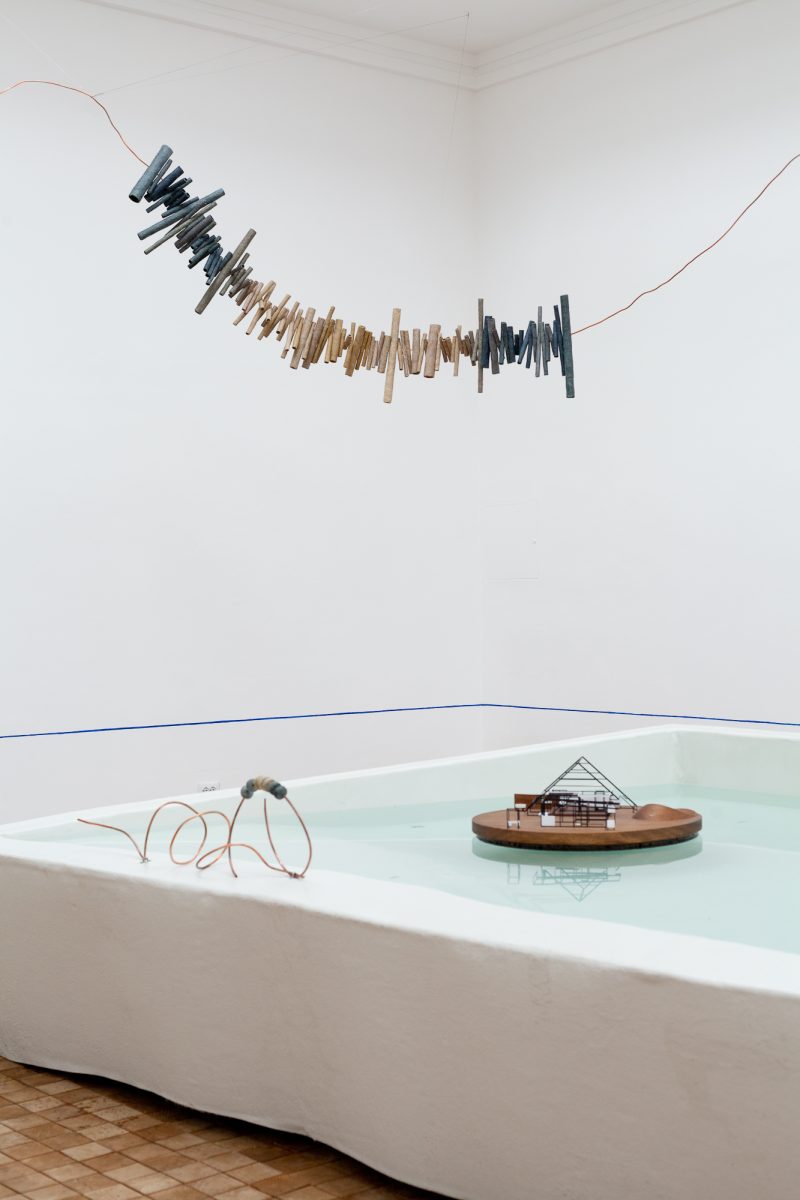 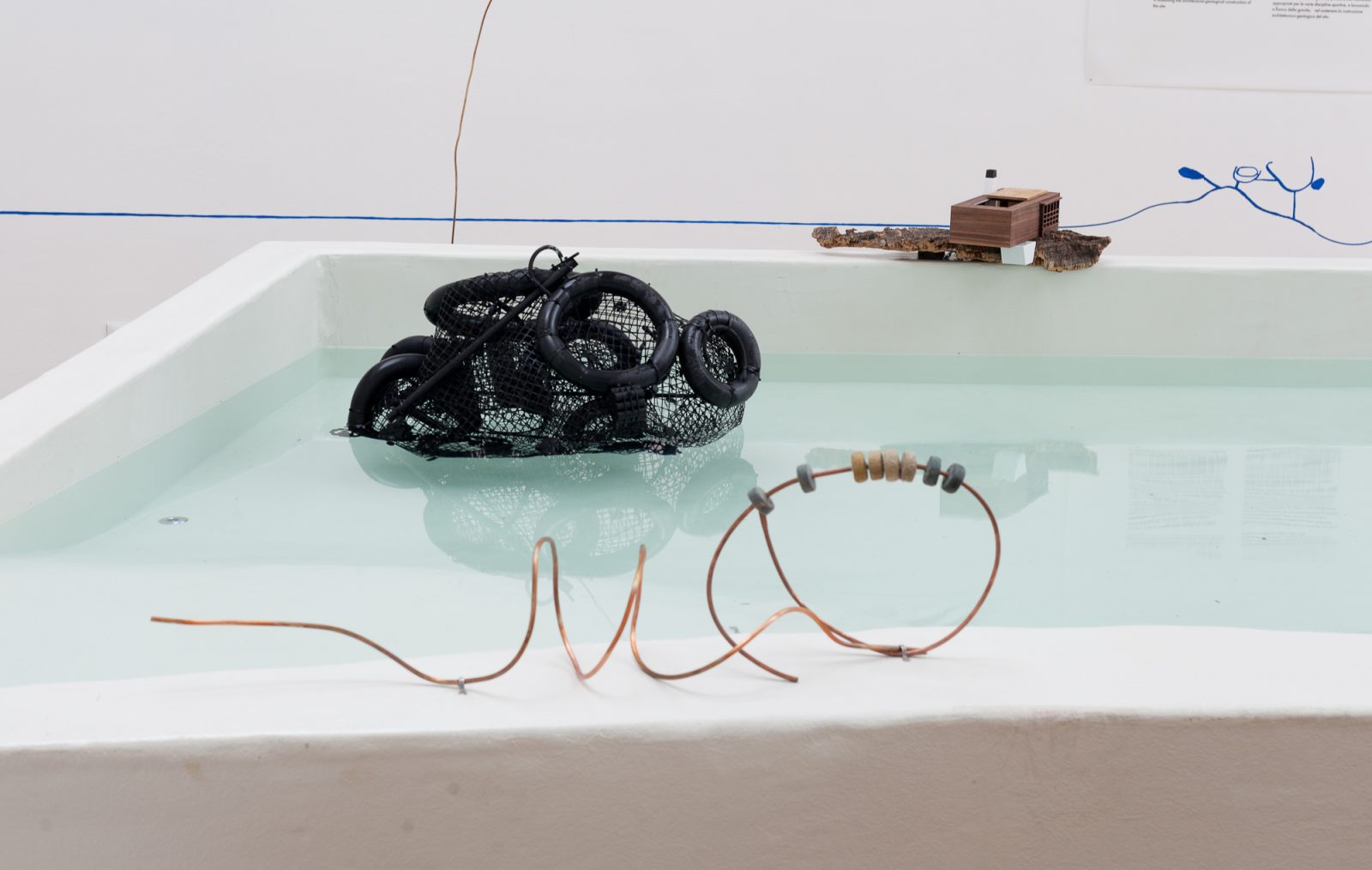 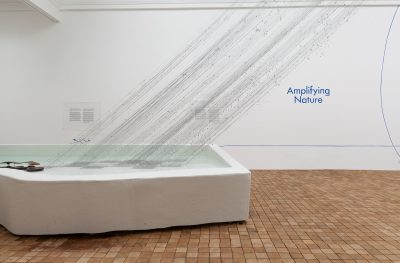 Iza Tarasewicz 11 www.izatarasewicz.com ↩︎, Amplifying Nature, mixed media installation, 2018.  Gravity, light oscillation and water circulation are represented by the installation in their localised processes related to the five architectonic studies. The installation follows the processes of land formation and energy conductivity. It consists of resin hardened on a clay model of the landscape as shaped by the Vistula River in what today is Warsaw, the form swelling under the weight of water. Water-borne, the architectural models can float freely. There is a suspended copper diagram of light and water circulation: types of rain characteristic for the Masovia region. The mode of working on the exhibition—artisanal, imperfect, following distortions that occur during the exhibition—stresses the relational character of the design process, informed by what is handy, while showing architecture and infrastructure as part of the Earth’s metabolic network. 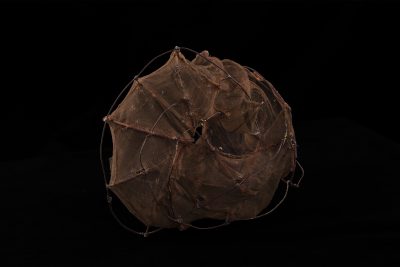 Floating Rotary Pavilion, 1:30 scale model, reinterpretation of Jacek Damięcki’s 1975 study work by CENTRALA, 2018. The speculative and performative aspects of Floating Rotary Pavilion stem from water buoyancy replacing gravity as an architectural principle. Jacek Damięcki designed the form to be entered on boats and rotating along a twisted-eight orbit, with the structure gradually revealing its underwater section. As such it renders architecture as the intensification of emotions through the experience of scale, the replacement of interior/exterior or subject/background oppositions with topology, as well as the physical negotiation of space, risk and stability in a technological-natural-biological environment. On the occasion of the exhibition, CENTRALA and Jacek Damięcki re-visit the idea and create subsequent proposals of the model of the Pavilion and its workings. The version presented in the exhibition should be regarded as work in progress. 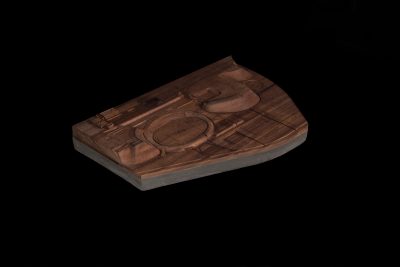 The Warszawianka sports complex, designed by the Art and Research Unit at the Academy of Fine Arts in Warsaw led by Jerzy Sołtan, 1:600 scale architectural model as of 1972, 2018. Warszawianka is a arge-scale complex for amateur sports and popular recreation, set into the gentle escarpment of the Vistula river valley characterised by its extraordinary hydrogeological formation. The terraces, embankments and hollows of Warszawianka (designed in 1954 by a multidisciplinary team, with construction ongoing until 1972) direct the course of the water that has been eroding the slopes of the escarpment continuously since theend of the last glacial period. As long as the idea of the design was cultivated through maintenance, water was acomponent that directed the flow of visitors (up to 8000 a day), produced microclimates appropriate for the various disciplines and worked alongside with gravity in sustaining the architectural-geological construction of the site. 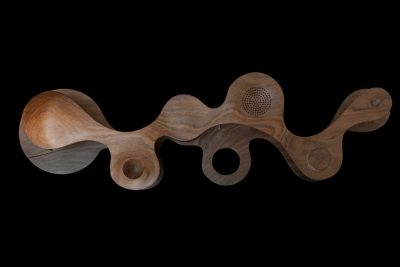 Rain Pavilion, study work by CENTRALA, 1:50 scale architectural model, 2018. The Rain Pavilion is a device devoted to precipitation—an atmospheric phenomenon of critical significance for the Earth’s ecosystem and the forms of assemblies it facilitates. Changing the way water circulation is perceived, connecting it multisensorially with social practices, is a postulated performative dimension of CENTRALA’s architectural intervention. The architecture of the Rain Pavilion is the amplification of the differences between seven types of rainfall characteristic for Warsaw and their names (now mostly obsolete) as identified by 1956 Władysław Kupiszewski’s ethnolinguistic study of regional weather dialect diversity. 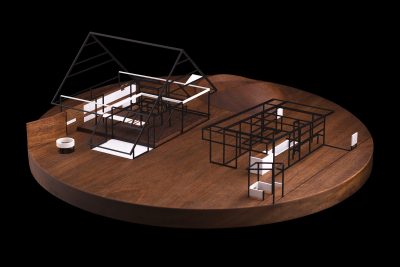 Zofia and Oskar Hansen’s House in Szumin, 1:25 scale architectural model as of 1975, 2018. The model is a score for choreography of everydayness in a form of white polychromes patching the building’s internal and external spaces. CENTRALA’s research on the house built for their family by Zofia and Oskar Hansen—the Team 10 architects—was focused on the embodied and material aspect of the house. The house, in accordance with Hansen’s Open Form, changed and was changed to reflect its users’ ideas. But learning about the family’s routines and observing the house beyond its compositional principles revealed it is also synced with the day-night cycle. It allowed the family and guests to function without electricity during the crepuscular and matutinal hours. The white polychromes reflect light during these dimmed hours of third time of the day which in Szumin can last even 4 hours a day. 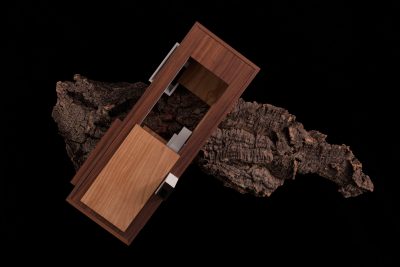 Cabrio House, study work by CENTRALA, 1:50 scale architectural model, 2018. The model presents the house as an extension of the human body. Cabrio House is a set-up consisting of two main spaces that can operate in two modes: open or closed. One space opens up vertically, the other horizontally. Removing the permanent vertical boundaries of the house shell would trigger a process analogical to that occurring in the body: the negotiation, transfer and transformation of matter and energy. It is a chronobiological house of many: synchronising with the planetary cycles by means of human, animal, bacterial and vegetal cyclical processes occurring in living organisms due to external factors such as the seasons of the year, the Earth’s axial rotation and the light-dark sequence. Cabrio House forgoes the functional notion of the interior: through its ‘double skins’ and convertible roof it encourages the inhabitants to negotiate their sense of security (in confrontation with the archetype of the house as a roof over one’s head), with the desire of vastness and contemplation of the sky. 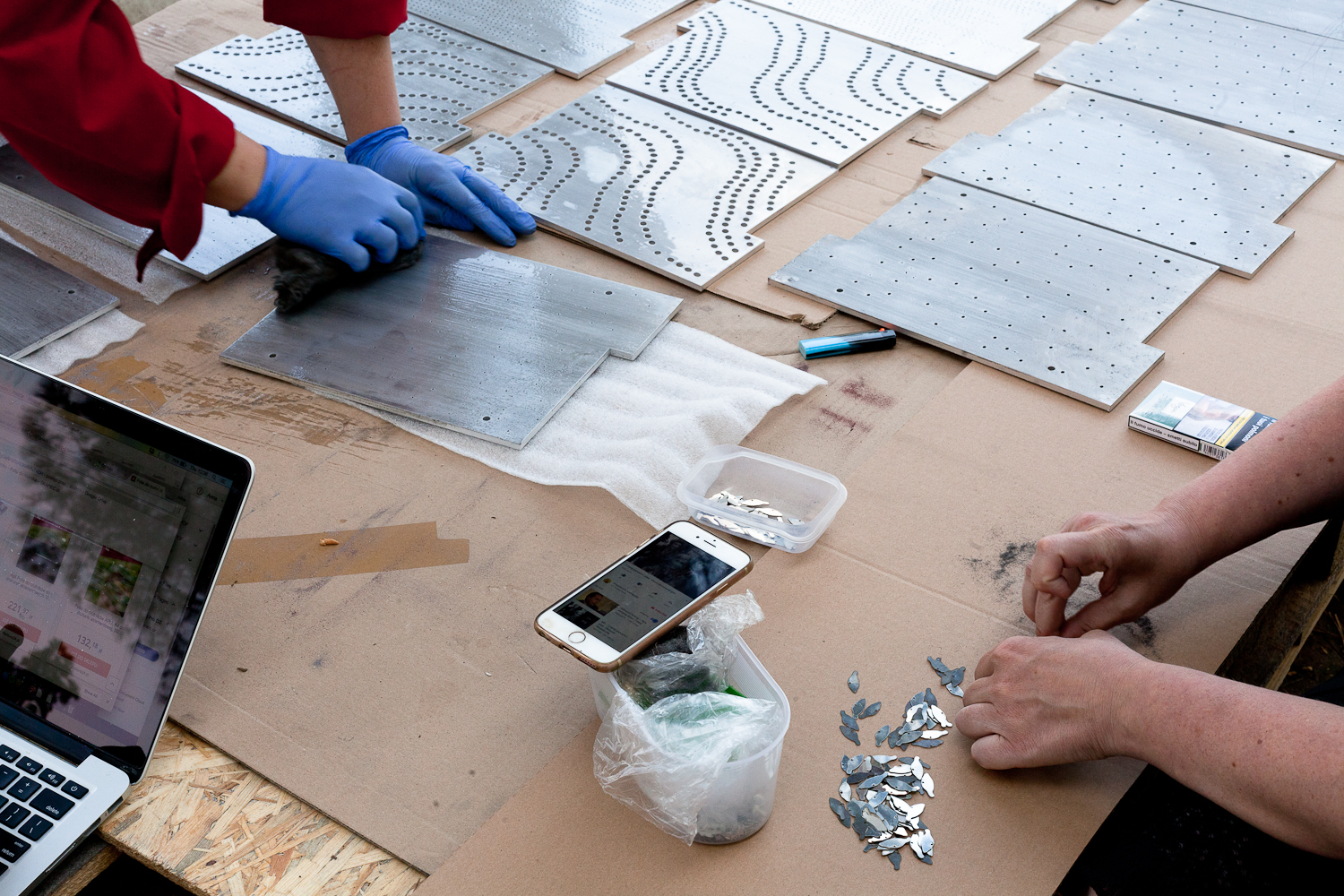 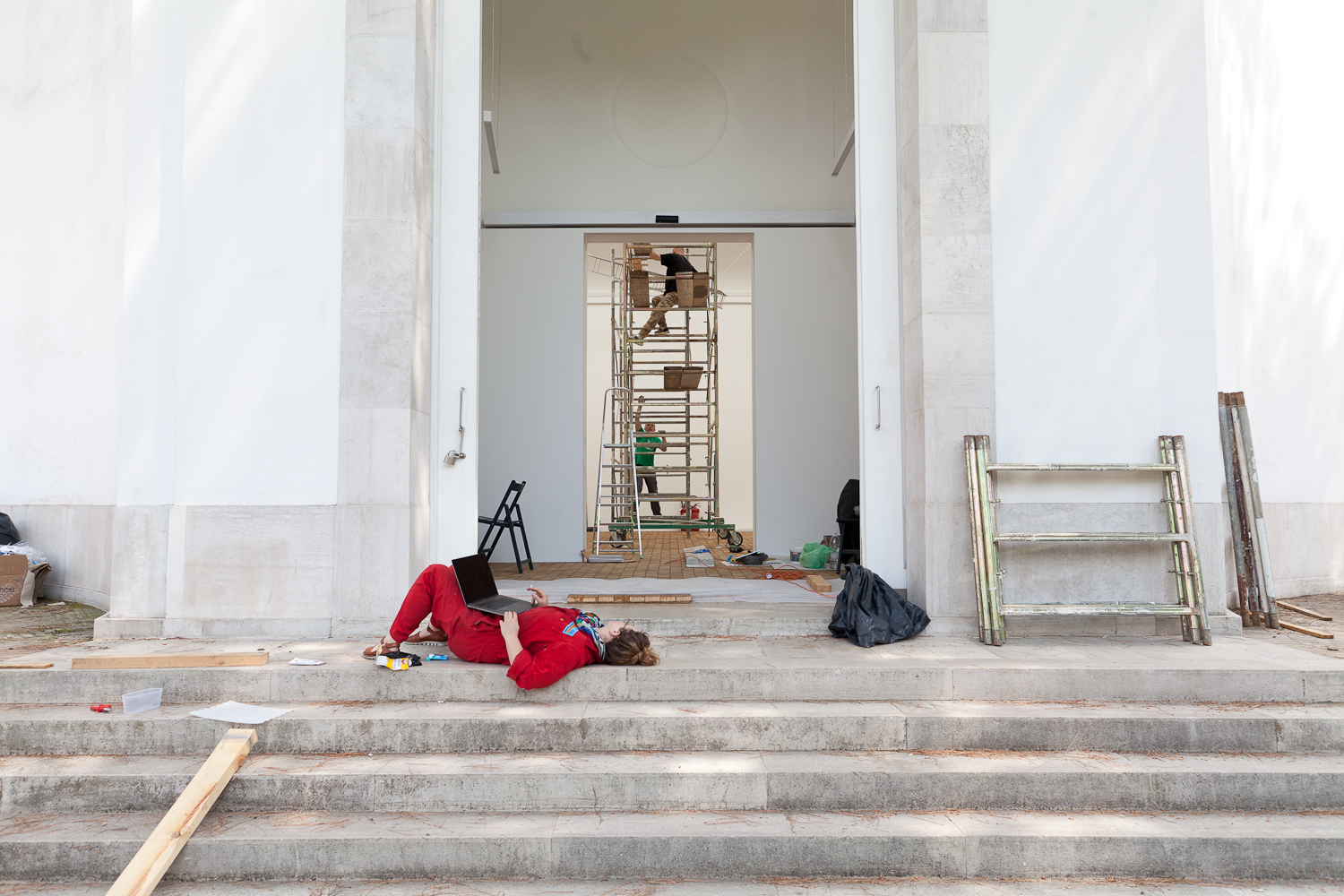 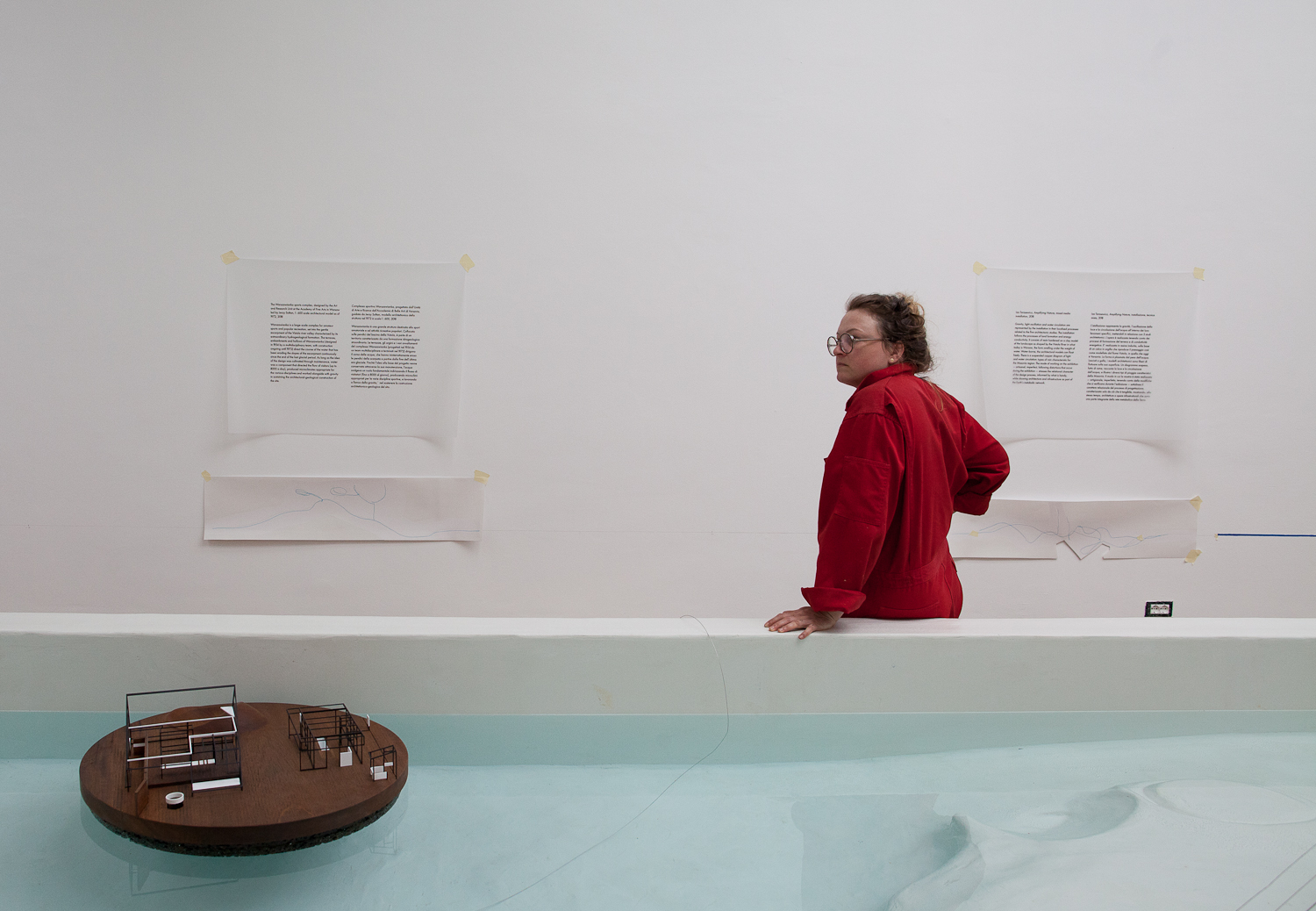 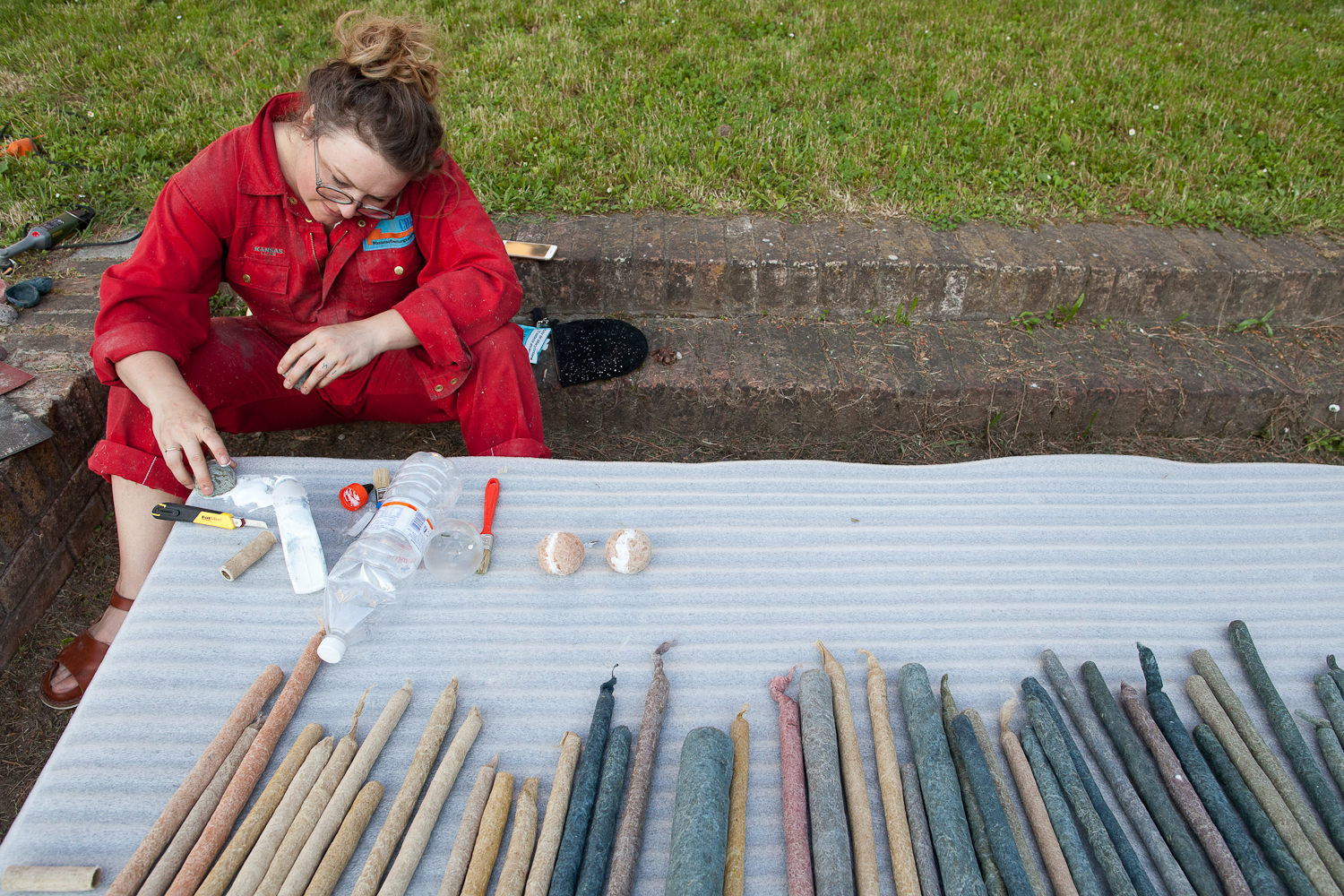 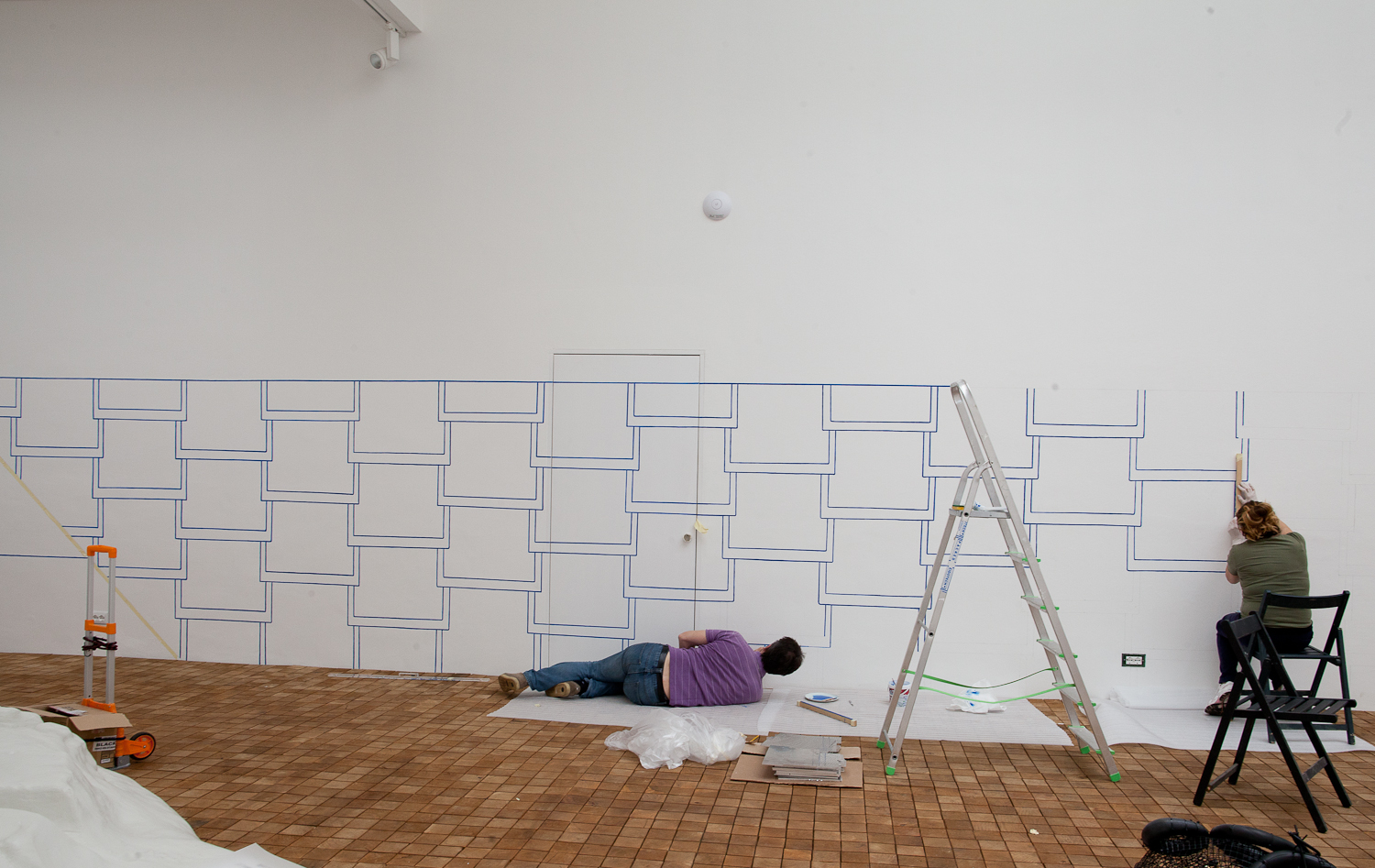 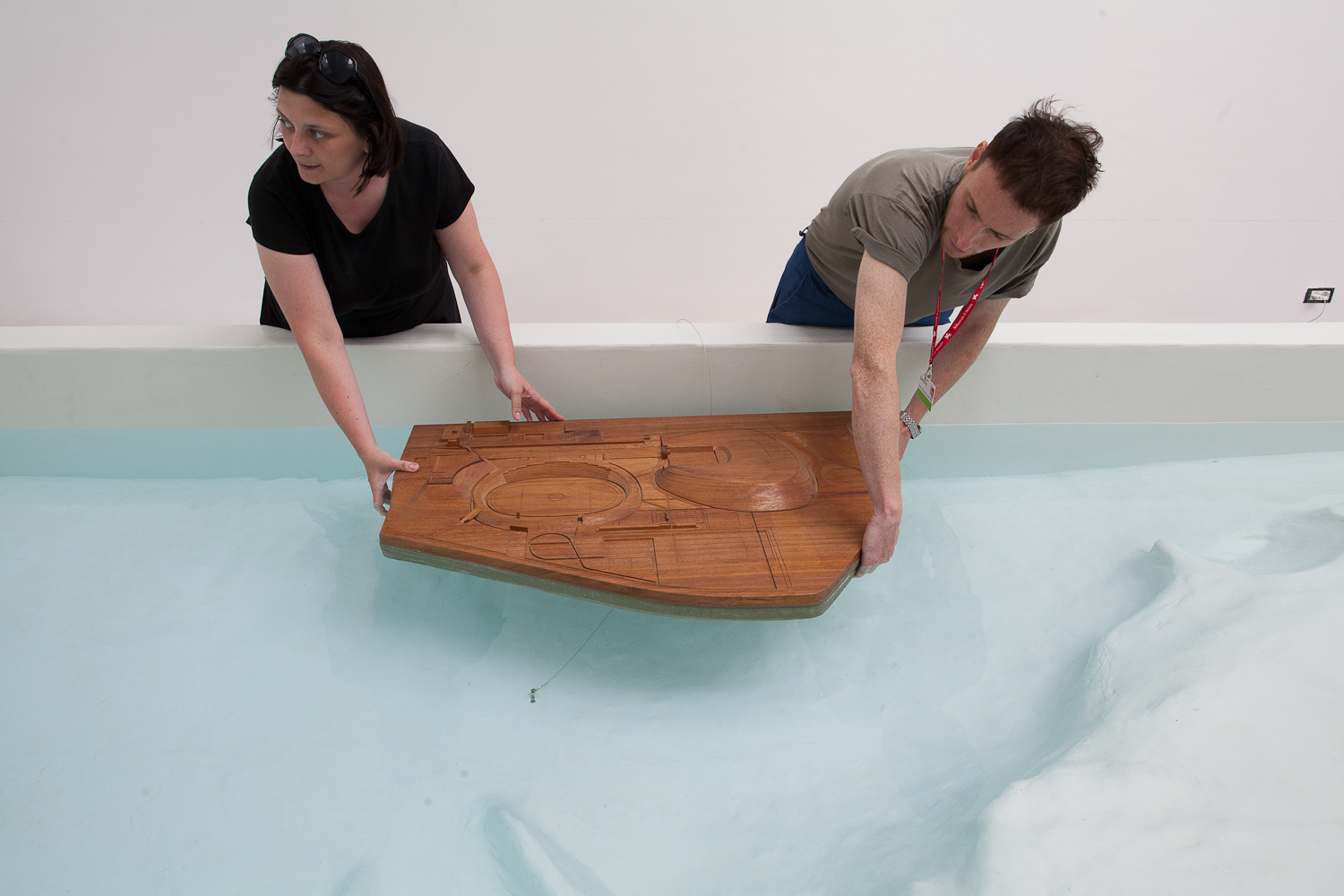 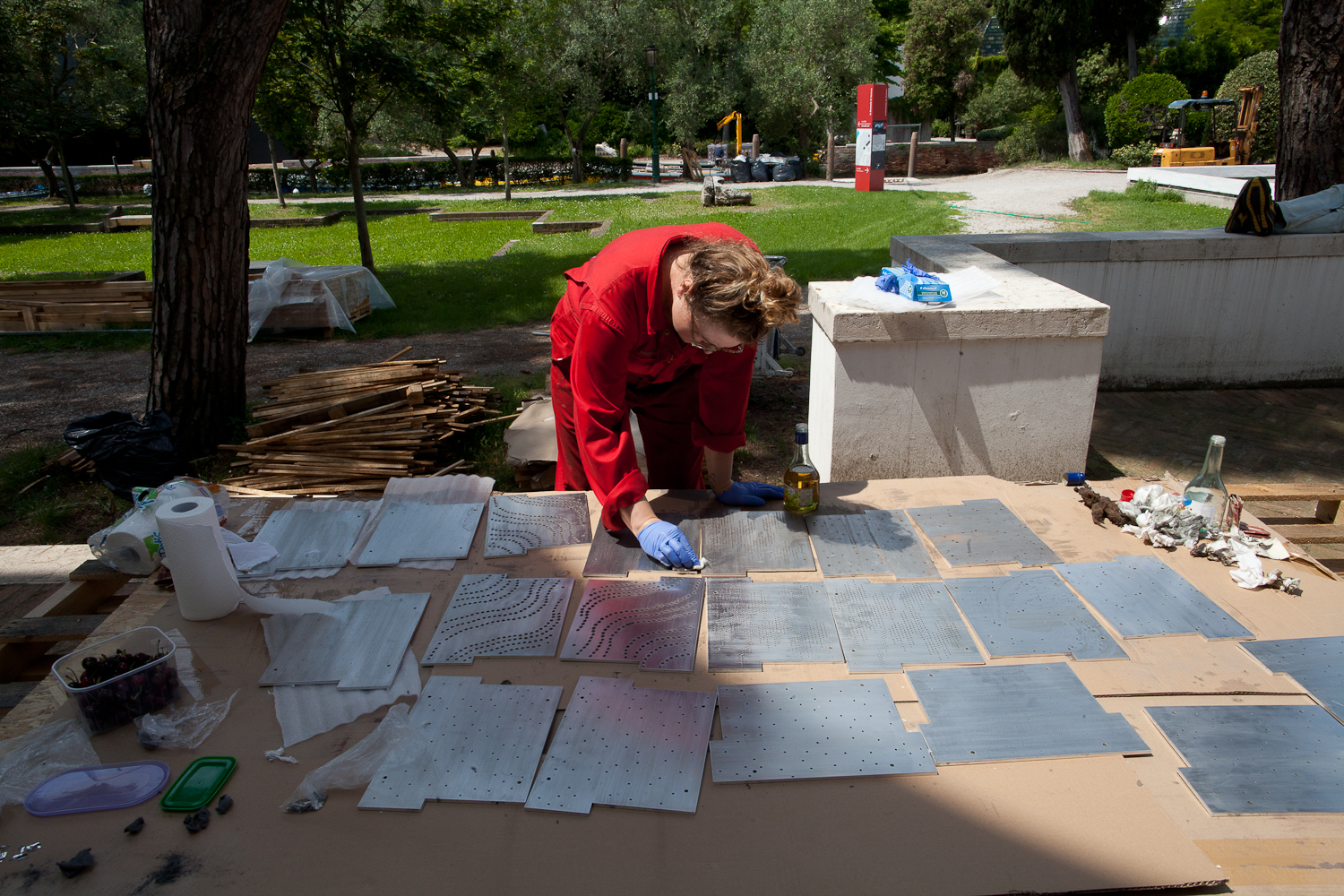 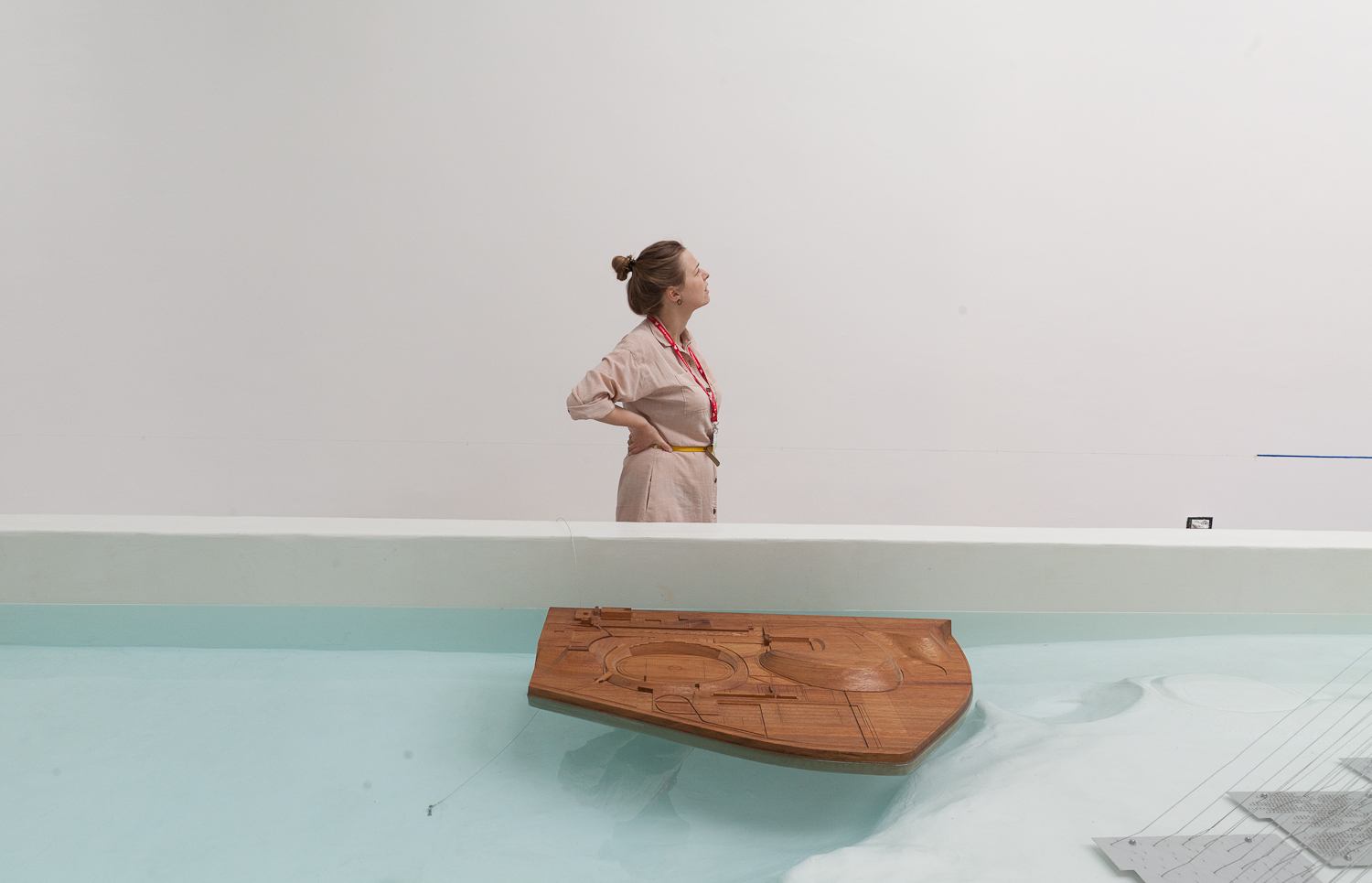 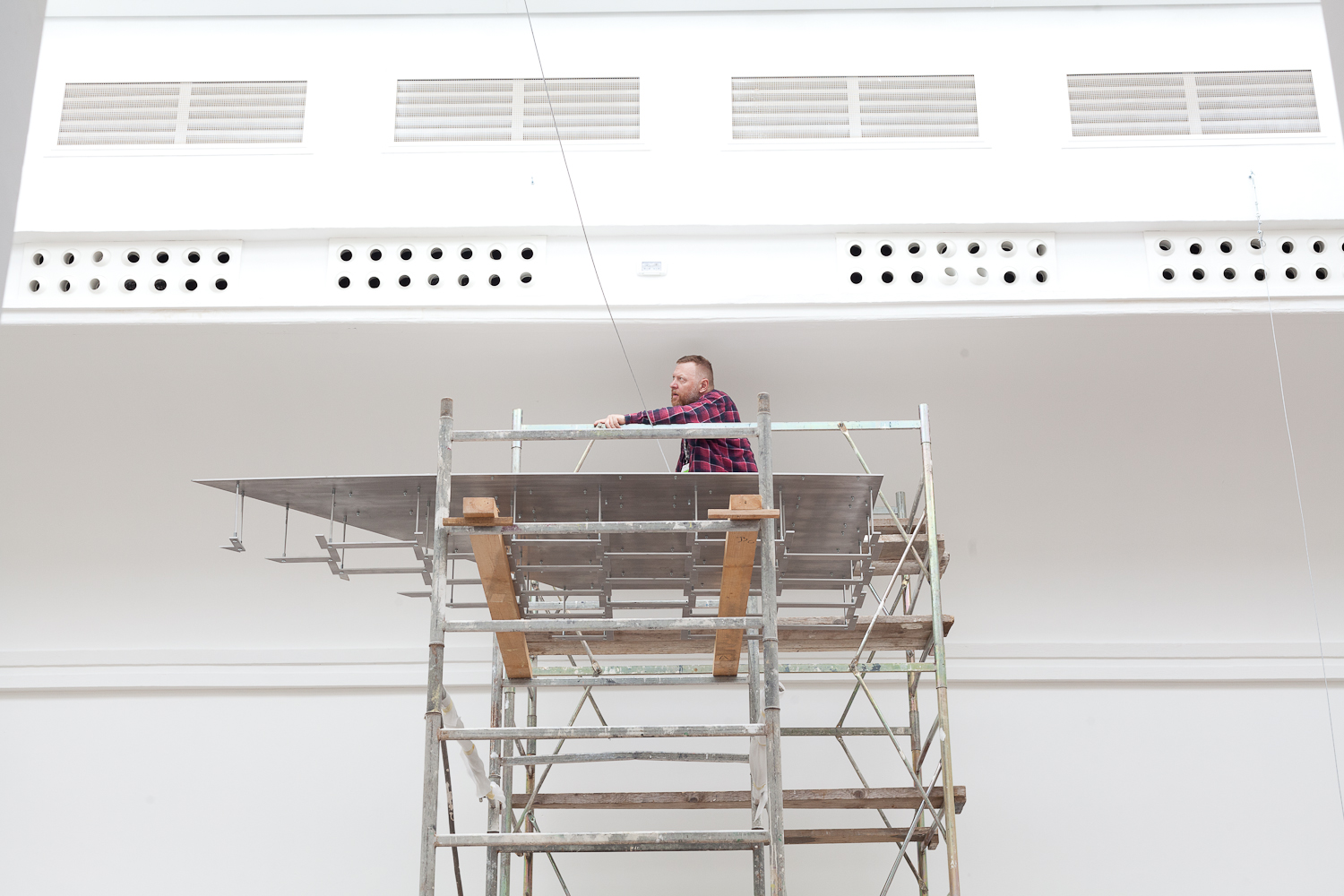 Accompanying publication:
Amplifying Nature. The Planetary Imagination of Architecture in the Anthropocene, 2018